SPRINGFIELD – Senate Republicans unveiled an updated package of crime bills this week that they say will help curb violent crime and provide a morale boost to law enforcement.

It’s substantially similar to the package the GOP introduced three months ago during the fall veto session to little fanfare from Democratic super majorities in either chamber of the General Assembly.

“We were here in October to offer reasonable proposals to help reduce crime, but the Democrats who control Springfield have refused to act since then,” Sen. Chapin Rose, R-Mahomet, said at a news conference Tuesday. “We’re here again, demanding the Democrats take action to protect the people of Illinois from the violence on our streets.”

The proposal includes a “Fund the Police Grant Act” that would provide $125 million in funding per year to local governments that will help with hiring, rehiring and retaining officers. Funding would help with the purchase of equipment and storage for body cameras along with other equipment designed to keep officers and communities safe and provide additional training.

Grants would be administered by the Illinois Law Enforcement Training and Standards Board.

Asked about that provision at a separate news conference Tuesday, Gov. JB Pritzker said his administration will “look at anything that we think will help address the problem of rising crime,” but he said his budget proposal contained significant investments to address the “challenges that municipalities are having with crime.”

The governor’s proposed budget for the fiscal year 2023 includes $4.5 million to help fund body cameras for Illinois State Police in accordance with the Safety, Accountability, Fairness and Equity-Today, or SAFE-T Act, passed in January 2021.

The SAFE-T act overhauls police certification, reforms use-of-force standards, improves police accountability and abolishes cash bail beginning in 2023 in favor of a system that prioritizes risk of re-offending over an offender’s ability to afford release.

In accordance with the SAFE-T Act, Pritzker proposed $3.5 million in additional resources for ILETSB’s operational costs, which include creating new trainings for officers and creating a public officer misconduct portal. Another $10 million would go to ILETSB to provide grants for body cameras related to the SAFE-T Act’s requirements.

But the law continues to face strong opposition from Republican lawmakers.

Their package in response to rising crime also proposes mandatory sentences of 10 years to life for violent gun offenders, imposes a 10-year minimum on those who sell or give firearms to convicted felons, and requires defendants who commit aggravated battery against an officer or brings a weapon into a penal institution to serve at least 85 percent of their sentence.

“These measures are necessary to not only give law enforcement the tools that they need, but also to send a clear message – go after our police and there will be consequences,” Sen. Sue Rezin, R-Morris, said.

Juveniles who commit crimes related to gun violence or violent carjackings could receive 10 years to life in prison, per the proposal.

But Pritzker, in his budget address, drew a stark contrast between his favored policies and those backed by the GOP.

“With the state and the nation experiencing a rise in violent crime, addressing public safety requires major investments. But too often those elected officials yelling the loudest about public safety concerns are also those voting to defund government budgets,” Pritzker said in his speech. “Crime is a complex and multi-faceted problem to tackle, and it’s cynical and counter-productive to simply shout ‘Lock them up’ while providing fewer resources to the people and programs that prevent crime in the first place.”

His FY23 budget includes $240 million for the Reimagine Public Safety Act, which aims at investing in youth-focused violence prevention resources in the state’s most dangerous areas. That includes $235 million from the federal American Rescue Plan Act for grants and $5 million in general revenue for staffing and operations.

Pritzker noted his budget includes an $18.6 million increase to allow for three classes of Illinois State Police cadets, about 300 officers.

But in their news conference, Republican Senators said local police need more funding, more recruits and the opportunity to provide more input on what police departments need in order to safely do their job.

David Hunt, a retired Piatt County Sheriff who joined GOP Senators at the news conference, said the reason he decided to retire before the end of his term was because of Democrats pushing police reform without the proper funding, as well as the measure end to cash bail.

Christian County Sheriff Bruce Kettelkamp and Chris Southwood, President of the Illinois Fraternal Order of Police, said that the reason for an increase in law enforcement members leaving is due to a lack of support from lawmakers and an increase in violence against the police.

“Our current system under the anything but SAFE-T Act is failing all of us. Violent crime is surging unchecked in our communities all across the state,” Southwood said.

The Senate Republicans’ package would repeal the end of cash bail, but that provision, among others in the SAFE-T Act, doesn’t take effect until January 2023.

“We’re not saying that we have all the answers to stop crime in its entirety,” Sen. Minority Leader Dan McConchie, R- Hawthorn Woods, said. “But we are saying we have good ideas that are derived from the law enforcement community itself that are saying that this will put us on the path to safer neighborhoods and help us defend our police.” 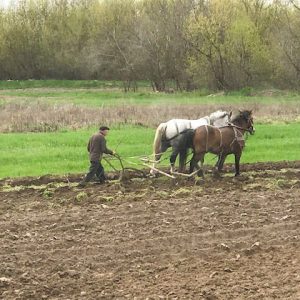 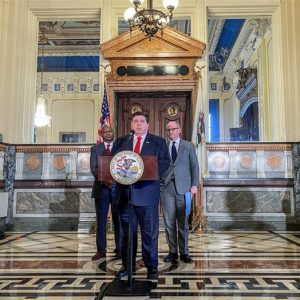 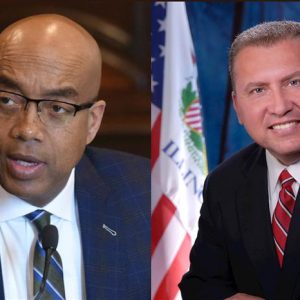 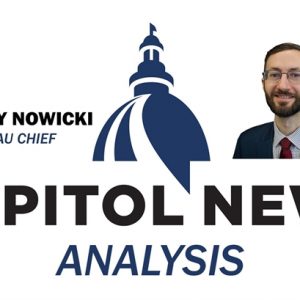