It’s not necessarily back to business as usual for the nation’s railroad industry now that the threat of a nationwide strike has been averted for a second time.

Industry representatives, who met with members of the National Grain and Feed Association at the Country Elevator Conference and Trade Show held fittingly at Union Station in St. Louis, say the focus now is to build crew numbers and improve overall rail service.

“Ultimately, it’s best for the overall economy. It was a compromise that takes into consideration both parties’ side to the story,” said James Wilson, director of marketing for Norfolk Southern Corp. “Hopefully everybody can come to grips with it, put it behind us and go to work.”

President Joe Biden signed into law a measure forcing 12 rail labor unions to adopt an agreement with rail companies earlier this month, ending the threat of a strike.

The labor dispute, along with shortages of crew members in some areas, contributed to rail service issues much of this year. A lack of timely grain shipments became problematic for the elevator industry during harvest and was exacerbated by low water levels on the Mississippi River system, which simultaneously snarled barge traffic.

“We’re manpower constrained in terms of moving product,” Wilson said. “Our service was not where we wanted it to be. It goes back to train crews available to move the product.”

Only Canadian National has posted on-time rates near 100% since July. Norfolk Southern doesn’t report such rates.

Overall, there have been 13 meltdowns in the North American rail industry since 2014, according to Paterson. He defined a meltdown as a situation in which a railroad runs out of crew or locomotives at a critical location, which reduces speed and compresses capacity.

Operations of a rail network generally slow about 20% during a meltdown.

“The common denominator of meltdowns has been crew shortages,” Paterson said.

He believes the railroad industry must come up with a better system to manage crew capacity and it needs to implement service reform and not just service recovery.

And that’s just what some are doing.

“We’ve aggressively gone out and hired and continue to hire,” Wilson said of Norfolk Southern. “We feel our network is actually running pretty well right now. We feel pretty confident how we’ve been performing.”

The company has a target of surpassing 7,500 train engine employees.

“Hopefully recessionary and inflationary issues subside and don’t impact our ability to hit our forecast,” Wilson added. “We appreciate the patience (from rail customers) continuing to work with us as we went through labor issues and service issues.”

Down the road, the rail industry is also looking at automation and technology to help deal with labor constraints.

Jim Gales, of Gales Design and Consulting, outlined the development of a “manless rail terminal” for grain elevators at the conference.

“This stuff is doable,” said Gales, who noted an automated grain terminal is in use in a controlled environment. “The technology is out there.”

An automatic test run, with no human intervention, was successfully carried out with a heavy haul cargo train on a 48-mile test track in Colorado.

Gas companies push back against effort to repeal surcharge 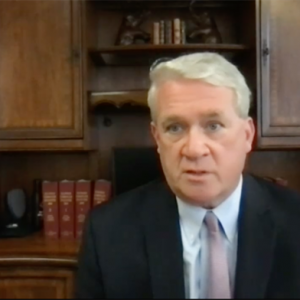